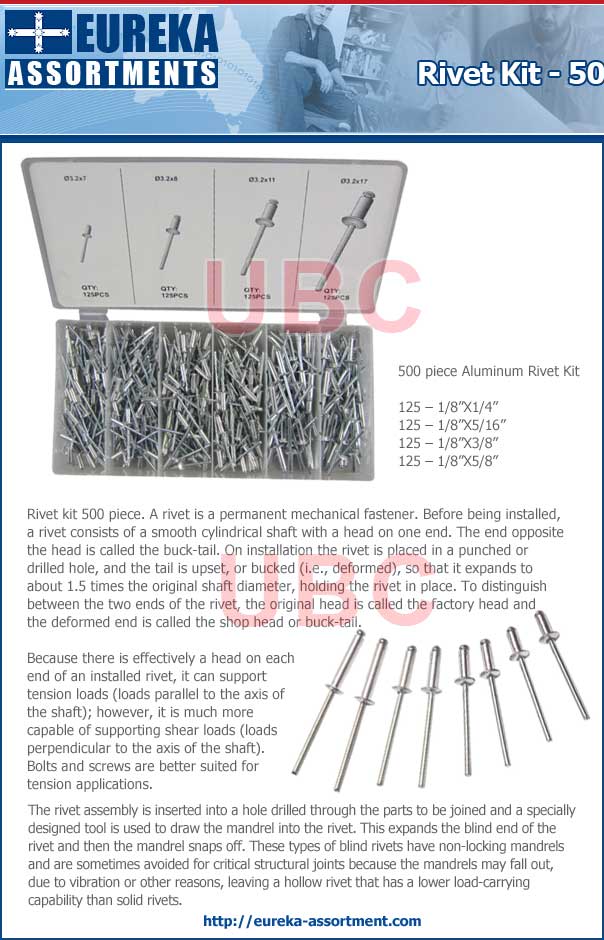 Rivet kit 500 piece. A rivet is a permanent mechanical fastener. Before being installed, a rivet consists of a smooth cylindrical shaft with a head on one end. The end opposite the head is called the buck-tail. On installation the rivet is placed in a punched or drilled hole, and the tail is upset, or bucked (i.e., deformed), so that it expands to about 1.5 times the original shaft diameter, holding the rivet in place. To distinguish between the two ends of the rivet, the original head is called the factory head and the deformed end is called the shop head or buck-tail.

The rivet assembly is inserted into a hole drilled through the parts to be joined and a specially designed tool is used to draw the mandrel into the rivet. This expands the blind end of the rivet and then the mandrel snaps off. These types of blind rivets have non-locking mandrels and are sometimes avoided for critical structural joints because the mandrels may fall out, due to vibration or other reasons, leaving a hollow rivet that has a lower load-carrying capability than solid rivets. Furthermore, because of the mandrel they are more prone to failure from corrosion and vibration. Unlike solid rivets, blind rivets can be inserted and fully installed in a joint from only one side of a part or structure, lind to the opposite side.