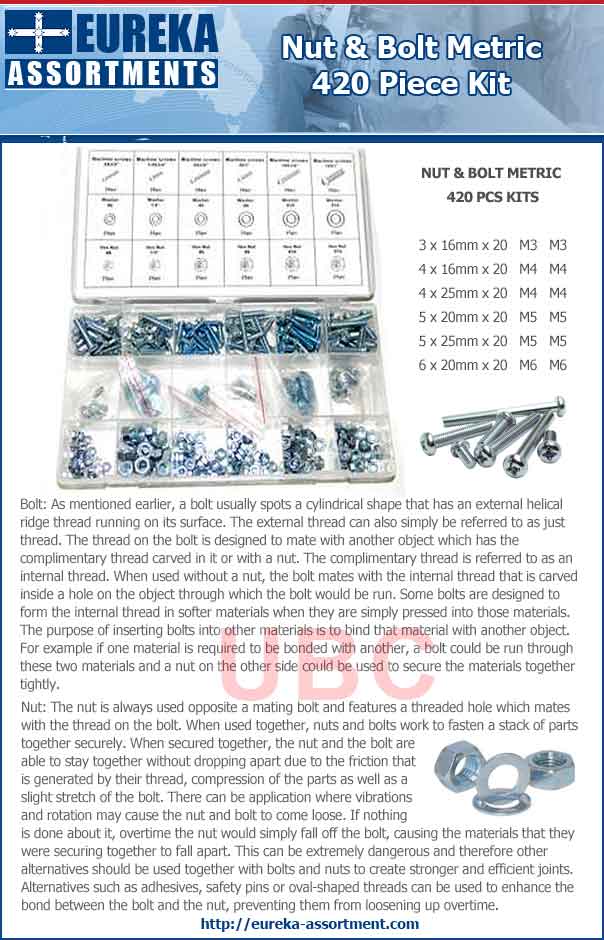 Nut and bolt metric kit 420 piece. Bolts and nuts are used in several applications, with a primary function to hold things or components together. A bolt, also known as a screw, does not always have to be used together with a nut; however, a nut is always used together with a bolt. Nuts and bolts serve as the fundamental components in several construction projects as they provide strong bonds that do not break even under great amounts of pressure. Bolts and nuts can have several different styles and types, each suited to match the needs of a particular application or the needs of the job. A bolt features a thread on a cylindrical shape and the nut features an internal thread which binds with the thread on the bolt. By running the bolt through the nut, it forms a very strong bond which has the ability to withstand great amounts of stress. The process of binding a nut and a bolt together is usually very simple but can be complicated depending on the type of bolt and nuts used and how the bolt is inserted through an object with the nut on the other side securely binding the object together.

As mentioned earlier, a bolt usually spots a cylindrical shape that has an external helical ridge thread running on its surface. The external thread can also simply be referred to as just thread. The thread on the bolt is designed to mate with another object which has the complimentary thread carved in it or with a nut. The complimentary thread is referred to as an internal thread. When used without a nut, the bolt mates with the internal thread that is carved inside a hole on the object through which the bolt would be run. Some bolts are designed to form the internal thread in softer materials when they are simply pressed into those materials. The purpose of inserting bolts into other materials is to bind that material with another object. For example if one material is required to be bonded with another, a bolt could be run through these two materials and a nut on the other side could be used to secure the materials together tightly.

As the screw or bolt is required to be driven into another material, it features a â€˜headâ€™, a specially formed section to allow the bolt to be turned. The head is usually flat with a â€˜+â€™ or â€˜-â€˜sign on it. This pattern allows for screwdrivers or wrenches to fit into the head and drive the bolt into the subject material. As the head is usually flat, it makes the head larger than the rest of the body of the bolt. This feature prevents the bolt from being too deeply driven into the material.

The nut is always used opposite a mating bolt and features a threaded hole which mates with the thread on the bolt. When used together, nuts and bolts work to fasten a stack of parts together securely. When secured together, the nut and the bolt are able to stay together without dropping apart due to the friction that is generated by their thread, compression of the parts as well as a slight stretch of the bolt. There can be application where vibrations and rotation may cause the nut and bolt to come loose. If nothing is done about it, overtime the nut would simply fall off the bolt, causing the materials that they were securing together to fall apart. This can be extremely dangerous and therefore other alternatives should be used together with bolts and nuts to create stronger and efficient joints. Alternatives such as adhesives, safety pins or oval-shaped threads can be used to enhance the bond between the bolt and the nut, preventing them from loosening up overtime.